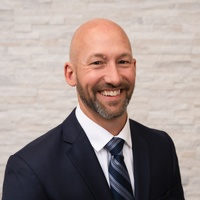 Currently Mike holds the title of “Worlds Greatest Dad” from his 3 Boys Jackson, Max, & Miles, as they are all young enough to still think he is cool.  His wife Jenn agrees with him that he is the “world’s greatest Husband” just so he will stop asking her if he is.  Mike’s focus on his family does not stop at home. Since 2009, Mike has been working with Queen City Financial Advisors & “Team Wingo.” This allows him to continue the third generation of Financial Planning started by his step-grandfather William T. Wingo in 1983.

Before joining Queen City, Mike earned a Bachelor’s degree in Biology from Ashland University, which he says directly relates to financial planning. The scientific method and the financial planning process are both designed to provide a solution and/or an expected/desired result.  After college he lived in Northeast Ohio and worked at a boutique software company. While working full time he also played in, and occasionally toured with, a rock band.

Although Mike grew up in Cincinnati, he and his family currently reside in Northern Kentucky. He says Kentucky being the Bourbon Capital of the World did not influence his decision to move across the river, but if you have a conversation about bourbon with him, your opinion may change. Outside of business in the office, he enjoys playing soccer and is a Crossfitter.

Mike says life experiences provide principals by which you operate. Living in Cleveland and being a Cincinnati sports fan gave him the experience of adversity needed in life. Especially since Pittsburgh is only 90 miles from Cleveland. In addition, he likes to remember that you should not take life too seriously as no one gets out alive.

Mike’s education and credentials put him at the top of his peers, but where Mike surpasses his peers is the practical application of the financial planning methodology worked through over generations of financial planning. The experience and knowledge which he has access to on a daily basis and has studied under is what allows him to excel.

If at any point while reading Mike’s bio you thought to yourself, I need to talk to this guy. By all means, give him a call or send him an e-mail.  He would be delighted to know someone actually read his bio!